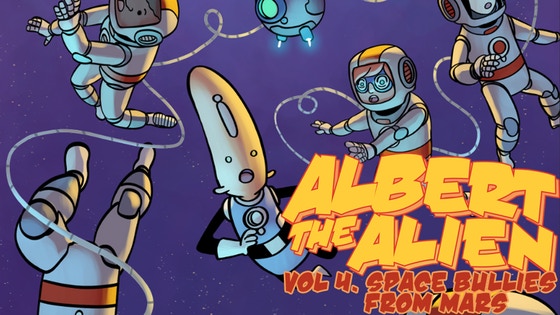 The final volume of Albert the Alien! The epic adventure of the first foreign exchange student from another planet ends here!

Latest Updates from Our Project:

It was a photo finish, but we made it. Thank you all so much for supporting us, and helping to share and spread the word about the project.

With 20 hours or so left, and about 60+ people following this project, I think it's quite possible for us to hit a stretch goal! We just need those 60+ people to pledge at the $25 level or higher, and we're at the $6k mark! Let's keep the strong momentum up!

It's the final countdown!

We're in the final hours of the campaign, and so very close to being funded. I want to thank each and every one of you for supporting this project, not only for pledging but also helping spread the word with links on your social media sites and the like. This project is so very special for Gabe and myself. We've been working on Albert the Alien for almost 10 years, and regularly for the last 6.

I'm putting the finishing touches on the book this week, while Gabe works on some bonus stories that are going into the book. This is going to be something truly special that we can't wait to share with you.

But we're not there yet!

We need everyone to please help by continuing to spread the word, share links to the campaign, and tell your friends about this incredible graphic novel project. We're only $250 away from funding this thing! Let's make it happen!

We are in the home stretch for the campaign, and have almost funded the printing of Albert the Alien vol 4: Space Bullies from Mars! SO EXCITING!

In the meantime, we have unlocked the next milestone - a free digital reward available to anyone who pledged at any reward level!

These digital rewards make for some excellent backgrounds for your phone or tablet, and can even be printed if you want to hang them on your wall!

Thank you guys so much for supporting this project, and we're almost at the end!

We have a number of incredible announcements, so let's jump right into it!

BALTIMORE COMIC CON: We're back from Baltimore. It was such an incredible weekend, and the support for Albert the Alien was overwhelming. We talked to a lot of fans, some new to the series, and some who have been with us for years. And the biggest surprise of the weekend was how well the books sold - we were sold out by noon on Saturday! I'll post pictures soon, but can't this week because....

...I'M HEADED TO NEW YORK COMIC CON: New York Comic Con (NYCC) is this weekend, and it's the largest comic convention in the USA. They're expecting over 250,000 attendees at the show this weekend, which is an INSANE amount of people. I'll be in artist alley, table 1B8, helping to support Reading with Pictures. We'll have Albert the Alien books and merch available as well, and even be talking up the Kickstarter! Speaking of the Kickstarter...

...KICKSTARTER LOVES US: I just got the e-mail this morning that Albert the Alien v4 has been featured as a "project we love" on Kickstarter! This is a huge honor, as not many projects receive this prestigious status. I like to think it's because of how awesome you guys are, since we did hit 52% funded in the first week. I cannot thank you enough for your support of this project. And I want to share that thanks with you guys in person...

...OR AT LEAST IN A LIVESTREAM:  Tonight, Oct 2, at 8:30pm CST (that's central time, here in Chicago), we are going to be doing a livestream Q&A right here on the Kickstarter page. I'll be starting it as soon as I put my kids down for the night, and chatting about Baltimore, this graphic novel project, and answering any questions you guys have. If you can't join, leave me a comment on this update and I will try to address your question in the video (which should stay live for 48 hours after the stream).

Oh man, I think that's about it. I'll see you guys in New York this weekend, and thanks again so much for supporting Albert the Alien vol 4!

This weekend, I'm going to be attending Baltimore Comic Con - table 3004, in the kids love comics area. I'm also co-hosting a workshop about how to draw creepy (and cute) monsters on Sunday with Emily Dourin.

If you're going to be attending the convention, please stop by the table and say hello. If not, no worries -we'll do a live stream on Tuesday to talk about the show and all the fun that was had!